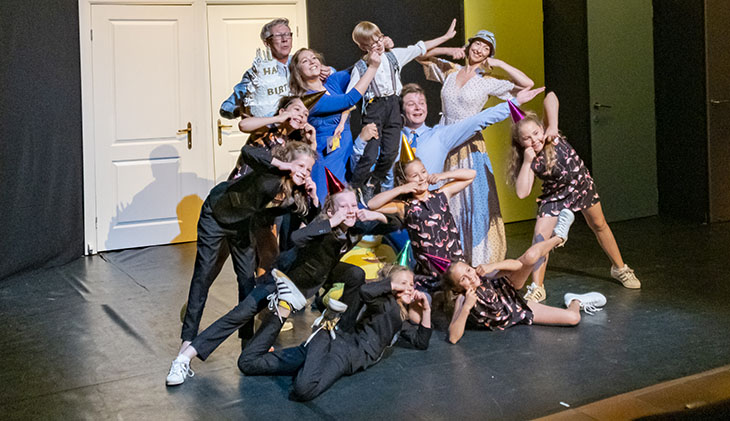 The Nightingale, The Ugly Duckling, The Little Match Girl, The Emperor’s New Clothes, Thumbelina, ... stories known and loved by everyone.
The Anders dan Anders(en) show is all about the fairy tales written by H.C. Andersen.
It is a collection of fairy tales revolving around a central theme: a playful introduction to opera music.
The sad scenes are underlined by arias from baroque opera, fragments from Viennese and French light opera accentuate the romantic and funny moments.
All text is in Dutch and suitable for young ears.
The vocals are supported by piano music, whereby the pianist is engaged in the action play.
Children are engaged and involved throughout the show, until eventually they are no longer just spectators: they become the actors/singers/dancers for the last fairy tale in the show.
The audience is arranged around the stage in a U-shape for this show, to make it easier to participate.
A silent mountain of suitcases, boxes and crates forms the centre of the hall.
The characters slowly come to life - they emerge from the suitcases, boxes and crates one by one to give shape to their personas: ANDERS, ANDERSEN and ANDERSOM.
Mr. Andersen crawls from a crate.
He is in a bad mood.
The attic must be tidied. And if there’s one thing Mr. Andersen hates, it’s tidying.
Not so for Mrs. Anders. „It is time to tidy the attic“: sings Mrs. Anders cheerfully, jumping from a worn-out travel case with all the energy in the world.
She is a world-class tidier-upper.
Andersen is trapped: whatever excuse he uses to get out of tidying, Mrs. Anders cannot be persuaded.
So, because Mr. Andersen will have to face the task this time, he comes up with a “tidy up” game...
Treasures in the attic!

Place of performance:
“De Rijschool” on the domain of the Landcommanderij Alden Biesen.
Unnumbered places.
Duration of the performance: about 50 minutes, without a break.

School performance. There are no individual tickets available!

Presentation for schools only