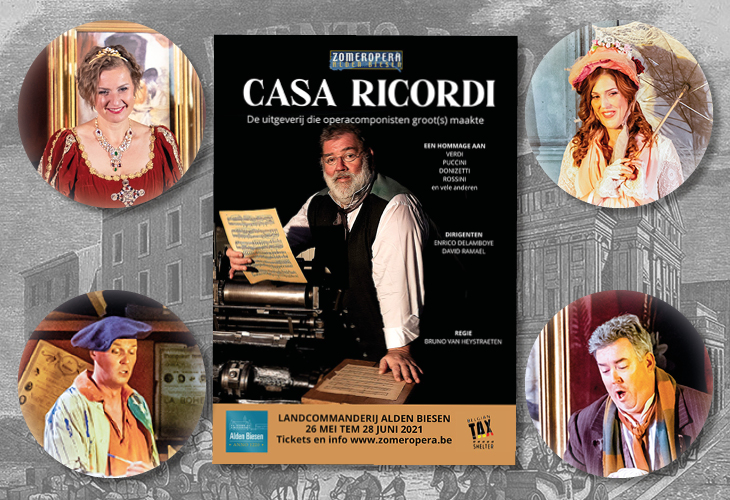 Publisher of Verdi, Rossini, Donizetti, Puccini and many more

In 1808, Giovanni Ricordi founded the first Italian printing house for sheet music. His company remains the largest publisher in the world in that field to this day. Casa Ricordi played an invaluable role in spreading the music of major opera composers such as Verdi, Rossini, Donizetti, Puccini and many more far and wide.

During our Zomeropera Season, Giovanni returns to the place where it all started one final time, and the memories come flooding back. As he browses through his scores, he lets the most celebrated Italian arias swirl around the courtyard and he recounts anecdotes from his time. Piet Vansichen will take on the role of Giovanni, surrounded by belgian soloists, sopranos Martine Reyners and Maartje Rammeloo, tenor Yves Saelens and baritone Koen van Agtmael. This cast will be accompanied by an orchestra led by conductors Enrico Delamboye and David Ramael.

Dates of the Performances

Duration of the operaconcert: 90 minutes without intermission

Seats will be placed in bubbles around the stage in the courtyard. The courtyard is outdoors, but four giant umbrellas will provide protection from the elements.

The seats are not numbered; our hosts and hostesses will guide spectators to their seats prior to the show and towards the exit after the show.