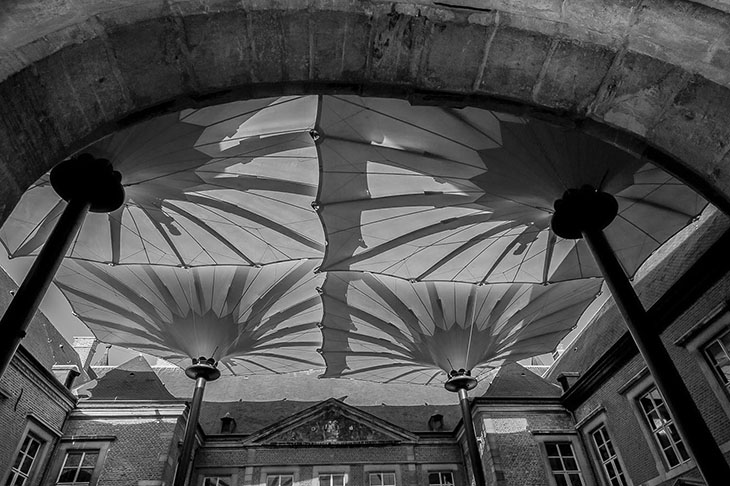 Zomeropera is pulling out all the stops for the 2020 season with a formidable production.
In Madame Butterfly, Puccini has blended vocals, music and theatre to create an overwhelming opera.
This is the ninth collaboration for director Frank Van Laecke and Zomeropera.
He cemented his fame in Flanders with the Studio 100 musicals 14-18, Daens and 40-45, and in the meanwhile he directs award-winning opera productions abroad.
The enchantingly beautiful music is conducted by Federico Santo, another familiar face at Zomeropera.  <br>He conducted the operas in 2010, 2011 and 2012 and has added Zomeropera to his international diary once more for this season.

Frank Van Laecke surmises his directorial concept as follows: “Cio-Cio-San shares her story with many others.
In her name, women (spectral shadows on the stage) wait for the return of he who will never stay.
Her total dedication, her unyielding reasoning make that waiting is merely an inevitable phase in the story of her life.
One that has a familiar ending. After all, there can be only two outcomes: reunion or death. Sorrow and hurt perish in both cases.”
The reveal in the finale as created by Frank Van Laecke is astounding and will leave no heart untouched.
The metamorphosis of a naive geisha into a young woman devastated by sorrow is directed in a splendid manner.
The set by Paul Gallis is an impressive feat of Japanese restraint, and the stunning costumes by Yan Tax combined with the lighting contribute to a meticulously correct atmosphere in each scene. Madame Butterfly is the moving story of Cio-Cio-San, a young Japanese woman, who spends years waiting for the love of her life, American lieutenant Benjamin Franklin, to return to her.
When it becomes clear that the unconditional love was unrequited, her world collapses.

I
For the American marine officer Pinkerton, the hastily arranged marriage to geisha Cio-Cio-San - Madame Butterfly - is an exotic adventure, but Butterfly is so earnestly committed to the union that she denounces the religion of her ancestors and converts to Christianity.
The American consul warns Pinkerton that there may be serious consequences, but he laughs off all objections. Butterfly’s family keeps them company for a long time after the ceremony, until the arrival of her uncle Bonzo, a Japanese priest.
He curses Butterfly who is promptly disowned by her entire family.
II
Three years later. Pinkerton had returned to America soon after the wedding and had not been in touch once.
Butterfly had given birth to his son and patiently awaits his return, even though her maid Suzuki and Goro the matchmaker are trying to convince her otherwise.
Sharpless reads out a letter in which Pinkerton says he is on his way to Japan, with his new American wife.
He advises Butterfly to accept prince Yamadori’s proposal, which she indignantly refuses. Pinkerton’s ship arrives; Butterfly and Suzuki prepare a festive welcome.
III
Pinkerton feels guilty when confronted with his child and avoids the confrontation.
Kate Pinkerton, Sharpless and Suzuki convince Butterfly that the child would be better off leaving for America with his father.
Butterfly, in her desperation, agrees on the condition that Pinkerton collects his son in person.
Butterfly commits suicide the moment Pinkerton arrives.

Dates of the Performances

This performance is only intended for NEOS members.
There are no tickets available for the general public.

This performance is only intended for NEON members.
There are no tickets available for the general public.